Drug Repurposing as a Source of Innovative Therapies in Pancreatic Cancer

POSTER
presented on EPC 2018 by our colleague Ilse Rooman

Pancreatic cancer (pancreatic ductal adenocarcinoma, PDAC) is one of the deadliest tumors with 5-year survival rates still under 10%. Few drugs have been able to make significant improvements in patient outcomes and, albeit that there is a pipeline of new agents, many fail in phase 2/3 clinical trials. Drug repurposing, an alternative development pathway, seeks to reuse existing drugs as the source of new treatment options. Repurposing benefits from existing data on safety, dosing and clinical experience.

Our goal was to provide a non-exhaustive listing of non-cancer drugs for which there is published evidence that they inhibit pancreatic tumor cells per se or the stromal stellate cells and immune cells that indirectly support the tumor.

We used the Repurposing Drugs in Oncology (ReDO) list of 240 approved non-cancer drugs. We queried PubMed (February 2018) for these drugs and the term ‘pancreatic cancer’. Of these, we highlight some drugs with strong preclinical data and stratify them according to mechanism of action (MOA) on pancreatic tumor cells or their microenvironment.

FDA-approved drugs currently used outside of oncology have shown activity against PDAC. Many of these warrant clinical investigation, as a complementary approach to commercially-driven clinical research. The data on MOA and molecular profiling of the tumours can assist in patient stratification. 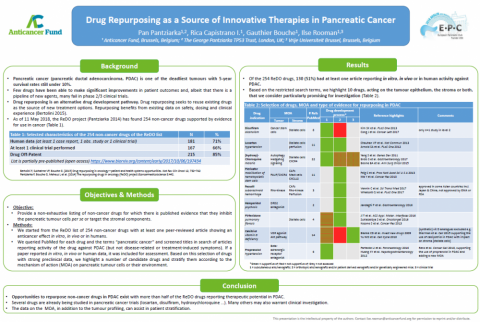