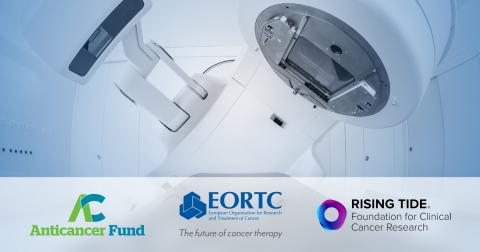 Brussels – The Anticancer Fund and the Rising Tide Foundation for Clinical Cancer Research announce their significant financial contribution to a trial in oligometastatic rare cancers, conducted by the European Organisation for Research and Treatment of Cancer (EORTC). The study will evaluate stereotactic body radiotherapy in addition to standard of care treatment in patients with oligometastatic rare cancers.

Metastatic cancer can range from a single metastasis to widely disseminated metastases, making it the leading cause of cancer death. Today, the concept of oligometastases is generally considered an intermediate state between locoregional cancer and widespread metastases with a limited number of lesions and organs involved. By nature of its limited spread, it has been shown through mostly retrospective studies that aggressive metastasis-directed therapy (surgery or radiation) added to standard of care systemic therapy achieved long-term survival or even cure in about one quarter of the patients. Two thirds of these patients had lung, prostate, breast or colorectal cancer.

In a joint grant call, the Anticancer Fund and the Rising Tide Foundation for Clinical Cancer Research have selected to award the EORTC 1945 OligoRARE clinical trial, which aims at improving overall survival in patients with oligometastatic rare cancers, including all solid cancer types except lung, breast, colon, prostate cancer.

The total cost of the EORTC OligoRARE study amounts to approximately €1.9M, of which the Anticancer Fund and Rising Tide Foundation will jointly contribute €800,000 while the remaining €1.1M has been secured by the EORTC.

“The Anticancer Fund believes in the power of partnerships to develop cancer treatments that are outside the scope of the pharma industry. Cancer care is multidisciplinary but clinical research in radiotherapy, and in surgery, is badly underserved, while contributing substantially to patients’ benefit”, explained Lydie Meheus, Managing Director of the Anticancer Fund. “We are also delighted we can join hands with EORTC and Rising Tide Foundation to make this trial happen. This is the second time we support an EORTC led trial and we believe this partnership is meant to last. Because together, we can do so much more.”

The CEO of Rising Tide GmbH, Wendelin Zellmayer stated, “Oligometastatic rare cancers are an under-served area in research. In collaboration with the Anticancer Fund, the Rising Tide Foundation for Clinical Cancer Research has granted the European Organization for Research and Treatment of Cancer (“EORTC”) a joint award to conduct a clinical trial in 6 countries with  Matthias Guckenberger from University Hospital Zurich as the Study Coordinator, to change the standard of treatment and improve patient outcome.”

The details of the study

OligoRARE builds on the experience and network of the partnership between the EORTC and ESTRO (European Society for Therapeutic Radiology and Oncology). EORTC’s OligoRARE, a European based study (six countries) with a transatlantic collaboration with British Columbia Cancer Agency in Canada, will be the first to be done using an identical stereotactic body radiotherapy (SBRT) approach in cancers where the oligometastatic state is uncommon, thus where data is severely lacking. The study will target patients with oligometastatic cancer, including all solid cancer types except lung, breast, colon and prostate cancer.

The primary objective of this clinical trial is to assess if the addition of SBRT improves overall survival (OS) compared to standard of care treatment alone, in patients with ‘oligometastatic rare’ cancers. Patients with a maximum of 5 oligometastatic lesions will be treated as per standard of care with or without the addition of targeted radiation therapy to sites of known disease. Standard of care in both arms may include chemotherapy, targeted therapy, hormonal therapy, immunotherapy or observation. Patients will be followed every 3 months for the first 2 years then every 6 months for the next 3 years.

A total of 200 patients will be recruited over a period of 5.5 years. Additional follow-up of 28 months is expected to provide the targeted number of events for analysis. The study is coordinated by Dr Matthias Guckenberger (Zurich, Switzerland) and Dr Piet Ost (Gent, Belgium).

On the study’s importance, Dr Mattias Guckenberger commented: “Today, we have a strong rational that adding local treatment, mostly radiotherapy or surgery, to systemic therapy improves survival of oligometastatic patients, meaning patients with only limited metastatic disease. Evidence is mostly based on the common cancer sites: lung cancer, colorectal cancer and prostate cancer. There is consequently a strong need to test this hypothesis of a curative approach in oligometastatic disease also in patients with less common cancer sites. Such a trial in rare oligometastatic cancer patients does require a large and strong network to enroll sufficiently large numbers of patients, which is the rational for the OligoCare trial in the European EORTC network.”